Regressive Congestion Tax Should be Repealed for ALL For-hire Vehicles

New York, NY — The Independent Drivers Guild is renewing its calls for a full repeal of New York State’s congestion tax, which places the cost of congestion squarely on the backs of low income for-hire vehicle drivers. Drivers for app-based companies are struggling to get by after years of being paid less than minimum wage and more than 1,700 have signed the Guild’s petition to repeal the regressive tax. Taxi drivers who were conned into buying medallions at inflated prices are also financially desperate. Meanwhile, commercial and delivery vehicles for companies like Amazon are exempt until at least the end of 2020. The real estate industry and their vehicles that block full lanes of traffic got a pass as well.

App-based for hire vehicle trips are already taxed much more highly than taxis and the new congestion tax made the disparity even worse. App-based for hire vehicle drivers were making less than minimum wage for years and their labor already had a sales tax of 8.875 percent, while taxis are exempt from the sales tax. The addition of the new NYS congestion tax pushed taxation on the average $20 app-based trip up to $5 or 25%. Meanwhile the same taxi trip is taxed $3.30.

“To place the burden of funding the MTA on the backs of the city’s most desperate, low income immigrant workers is simply obscene. It’s a regressive law that should be repealed period. We feel for the taxi drivers who are suffering, however app-based drivers are suffering as well after years of poverty wages. This tax is a bad law that should be repealed for all for-hire vehicle trips,” said Independent Drivers Guild Executive Director Brendan Sexton. “Why give special interests and billionaires a pass by failing to pass taxes like the pied-a-terre tax on billionaires and instead shift costs to poor immigrants who work 12 hour days? It’s time for our legislature to repeal this unfair tax on the labor of all for-hire vehicle drivers and instead make the millionaires and billionaires pay their share.” 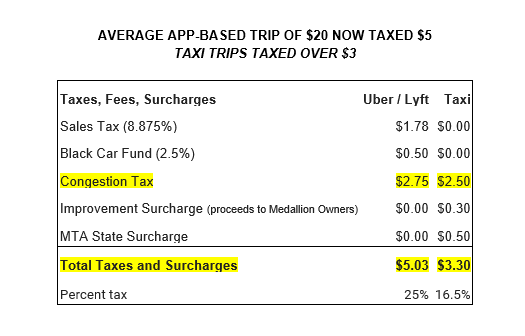 Before the new tax went into place, for-hire vehicle trips were already taxed over $260 million per year in sales tax alone.  With the new FHV congestion tax that took effect in February, the average Uber or Lyft trip in Manhattan is taxed $5 or 25 percent.  A $20 taxi trip is now taxed $3.30 or 16.5%. Taxis are exempt from the 8.875% sales tax. However, they were already taxed some $57 million per year with the MTA fee.

See more background and the Guild’s written testimony on this tax from November 2018:

http://driversguild.org/2018/11/28/uber-and-lyft-drivers-slam-unfair-regressive-congestion-tax/
IDG is a Machinists Union affiliate which represents and advocates for more than 70,000 app-based drivers in NYC. The Guild led a two year campaign, amassing more than 16,000 signatures, to win the nation’s first minimum wage rules for drivers for apps like Uber and Lyft.