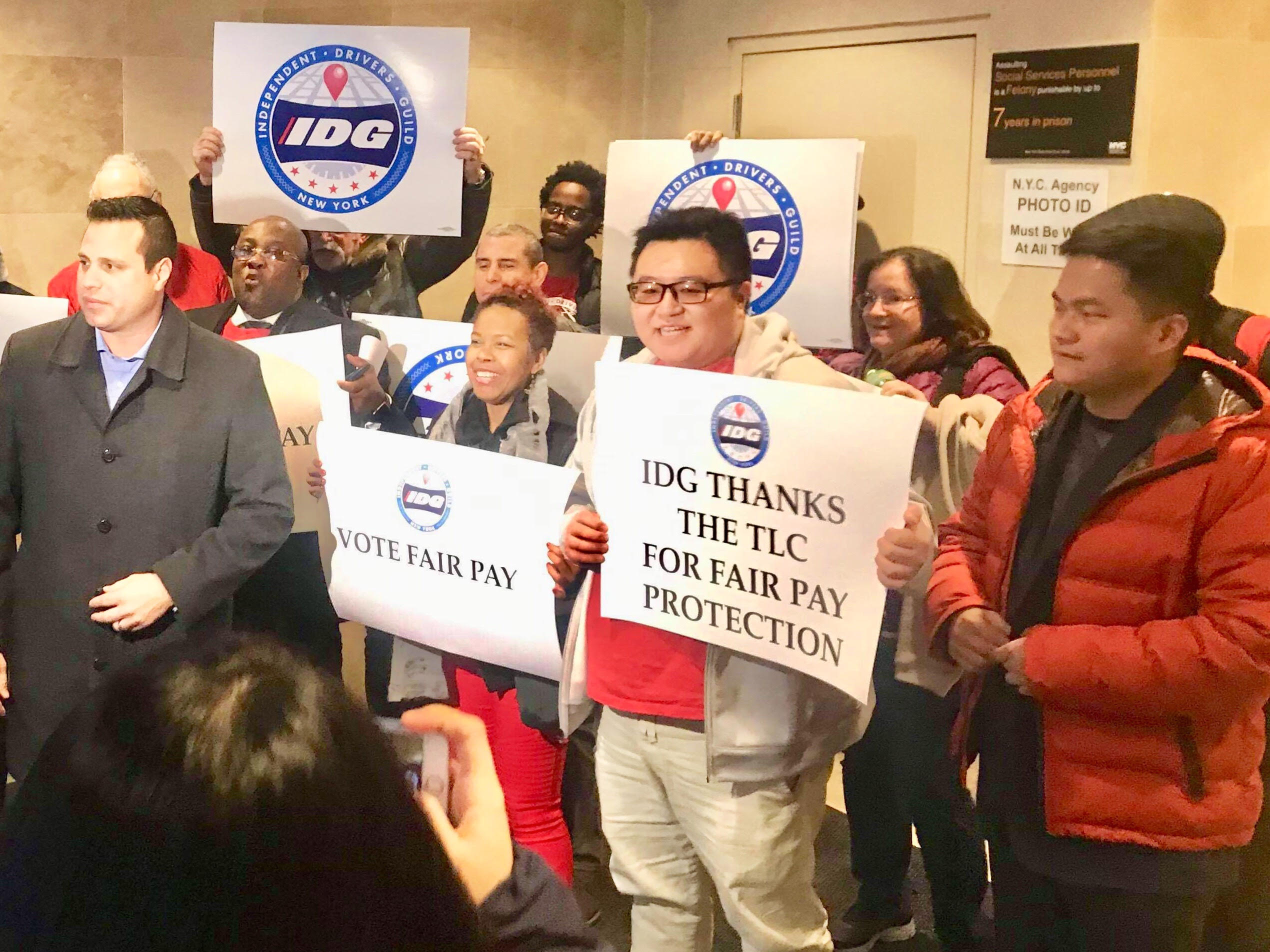 After a two year worker-led campaign by the Independent Drivers Guild, New York City officials voted Tuesday morning to set the nation’s first minimum pay rate for app-based drivers. The rate is set at $17.22 per hour after expenses ($26.51 per hour gross), which the city Taxi and Limousine Commission calculated as the contractor equivalent of New York City’s employee minimum wage of $15 per hour (effective 12/31/18). The rules come in response to a massive campaign by the IDG including a petition signed by 16,000 drivers and many months of rallies, research, and lobby days as well as thousands of calls and letters to city officials. The pay rules will go into effect in 30 days and will bring desperately needed relief to more than 70,000 working families who are struggling to get by on the current pay rate of $11.90 per hour after expenses. The new pay floor will raise driver pay by over $9,600 per year, according to the commission’s analysis.

“Today we brought desperately needed relief to 80,000 working families. All workers deserve the protection of a fair, livable wage and we are proud to be setting the new bar for contractor workers’ rights in America,” said Jim Conigliaro, Jr., founder of the Independent Drivers Guild. “We are thankful to the Mayor, Commissioner Joshi and the Taxi and Limousine Commission, City Council Member Brad Lander and all of the city officials who listened to and stood up for drivers.”

“I’m proud that my bill will make New York City the first major U.S. city to establish a minimum pay standard and living wage requirement for Uber and Lyft drivers,” said Council Member Brad Lander. “I’m thrilled the TLC is voting to finalize the rules today, which will protect drivers, level the playing field and support accessibility. Huge thanks to the Independent Drivers Guild for organizing tirelessly around this issue and for ringing the alarm bell on driver pay.”

“People told us we could never win, not against billion dollar companies like Uber and Lyft. But we proved that when workers come together, nothing is impossible,” said IDG member and driver for apps like Uber and Lyft Hailing “Henry” Chen.

In the two years since the Independent Drivers Guild first called on the city to establish a pay floor, the Guild has waged a massive, worker-led campaign. See the timeline here. More than 16,000 drivers signed the IDG’s petition to require a minimum pay rate for apps like Uber and Lyft. To force action, the IDG filed a formal rulemaking petition in March and the city responded in May that it planned to act on pay rules this summer. In August, the city council passed and Mayor de Blasio signed legislation sponsored by Council Member Brad Lander requiring the Taxi and Limousine Commission to set minimum payments for drivers for high volume app-based for-hire vehicle services like Uber and Lyft.

The new rules include the following policies originally proposed by the IDG:

The IDG used the same regulatory and legislative tactics to require Uber to add a tipping option to the app last year. Just months after the city greenlighted the IDG’s proposed tipping rules in April 2017, Uber added an in-app tipping option not only for New York City (its biggest market) but for drivers across the U.S.

The IDG has also won first of their kind benefits for app-based and Black Car drivers, securing vision and 24/7 telemedicine health benefits this summer, as well as a death benefit for drivers killed on the job and free flu shots.

The Independent Drivers Guild is an affiliate of the Machinists Union which has represented and organized Black Car drivers for more than 20 years in New York City. We are Uber, Lyft, Juno, and Via drivers united for a fair for-hire vehicle industry.