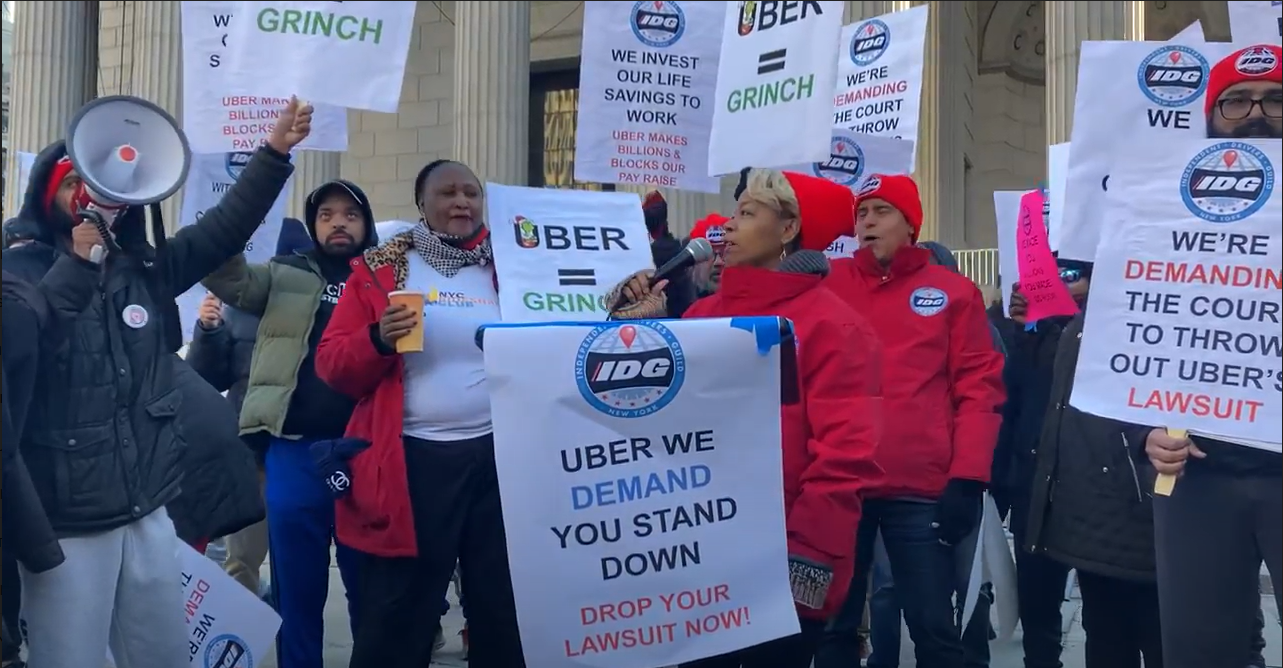 New York, NY – More than 500 New York Uber and Lyft drivers with the Independent Drivers Guild braved the frigid temperatures and hit the streets Monday morning in protest of a New York State Supreme Court judge’s new decision to grant Uber’s request to temporarily halt essential pay raises that Uber has sued to roadblock. The drivers, members of the Independent Drivers Guild, caravanned over the Brooklyn Bridge and into Manhattan to circle the New York Courthouses at 60 Centre Street and Foley Square, where they held a rally on the courthouse steps demanding that Uber pay their raise.  The caravan of cars displayed flags, signs, and posters as they drove over the Brooklyn bridge and circled the New York Supreme Court and Foley Square.

The Independent Drivers Guild, the nation’s largest rideshare advocacy organization and a Machinists Union affiliate, fought for years for this pay increase and is demanding that Uber pay up. The planned pay increase was supposed to go into effect today, Monday December 19th. Despite record corporate profits, rideshare giant Uber sued the NYC Taxi and Limousine Commission to  block the driver pay increases, a necessary adjustment to ensure drivers are paid no less than the equivalent of New York City’s minimum wage after expenses.

“Uber is the grinch who stole Christmas for tens of thousands of New York City families and today drivers showed up in force to send a clear signal to Uber. We are not going to take this!” said Independent Drivers Guild Organizing Director Aziz Bah, a longtime Uber driver based in Corona, Queens. “Thousands of New York drivers fought for years to win these raises. We testified, we rallied, we produced reports on our expenses. While Uber is pocketing larger and larger commissions from every fare, drivers are being squeezed with the rising cost of living, gas, and car insurance.”

“What do we want? Our pay raise! When do we want it? Now!,” chanted members of the Guild, led by Brooklyn – based IDG member and longtime Uber driver Michele Dottin. “Uber has reached record profits on the backs of the drivers. But instead of sharing that income with the drivers, they are taking larger and larger shares out of each fare. We’re not asking for a handout. We are demanding what we earned!” added Dottin.

“Thousands of families like mine were depending on this raise to finally break even. Now I don’t know what we will do,” said Long Island-based IDG Member Arifa Tirmizi, who has driven for Uber in New York City for six years to support her family, including her seven children.

“Today drivers showed up in force to send a clear signal to Uber. We are not going to take this!! Uber blocking our raise right before the holidays is a slap in the face. This raise covers what we already deserve to cover our working expenses and inflation,” said Independent Drivers Guild member Malik Anwaar, who has driven for Uber in New York City for more than 5 years. “By blocking this raise, Uber is advocating to pay drivers less than minimum wage. It’s offensive and wrong.”

The Independent Drivers Guild is a Machinists Union affiliate that represents and advocates for more than 250,000 drivers across NY, NJ, CT, MA and IL, including 80,000 drivers in New York City alone. We are Uber and Lyft workers united for a fair industry. The Guild’s organizing has secured landmark victories that put billions of dollars in the pockets of drivers, including requiring a tipping option in the Uber app and winning the nation’s first minimum wage (after expenses) for rideshare drivers in New York City.