New York, NY — After a two year campaign by the Independent Drivers Guild, New York’s Taxi and Limousine Commission held a hearing TODAY Wednesday, October 3rd on the nation’s first livable wage rules for drivers for apps like Uber and Lyft. The city’s proposed rules, put forward following the Guild’s campaign and regulatory petition, would mean a 22.5% raise for drivers, a pay increase if Uber and Lyft over-hire, and annual cost of living increases.

The proposed pay structure is a vital and revolutionary move toward regulating the app-based industry to make it more fair for working people. However, the Guild found that the city’s proposal underestimates driver costs in several areas, most dramatically in the areas of vehicle lease and rental costs and in the cost of benefits. The IDG, which represents more than 65,000 app-based drivers in New York City, is calling for the Commission to fix the cost estimates in light of this new data and then pass the amended rules swiftly.

While the city estimated lease costs at $635 per month, new data collected by the IDG shows the actual cost incurred by drivers averages nearly three times that. The IDG collected lease data from more than 500 app-based drivers who reported paying an average of more than $1800 per month. This is consistent with the lease prices offered at the city’s major leasing companies for compact sedans. Many leases include industry-specific liability insurance, and some require extra fees to purchase TLC insurance. But even if you combine the city estimates for leasing and insurance ($400/month), the city’s total ($1035 per month) still comes up far short of the average reported by drivers. What’s more, the city’s pay formula assumed that 80 percent of drivers own their vehicles and just twenty percent lease or rent, but multiple IDG surveys found that the breakdown is 60 percent own and 40 percent lease or rent. The IDG is calling on the city to update its pay formula to reflect the reality of drivers’ expenses

Additionally, the city’s proposed pay formula fails to account for the many benefits that employees receive, like health insurance, disability, Unemployment Insurance and several other benefits that drivers must bear the risk for. A report from the Economic Policy Institute analyzing Uber driver pay earlier this year concluded that the cost shifted to drivers for standard benefits equals 14.1 percent of wages. This is a significant expense that is omitted from the city formula.

Furthermore, the $15 per hour salary at the core of the city’s calculations is lower than the industry standard for professional drivers who have obtained specialized licensure, as is required for for-hire vehicle drivers in New York City. For example, minimum pay for the city’s MTA bus drivers is currently $23.85 per hour — and that is before a laundry list of benefits, none of which Uber and Lyft drivers receive and which are not accounted for in the city’s calculations. A fair base rate before expenses would be a minimum of $20 per hour as employees, $22.96 as independent contractors, to bring the FHV sector closer in line with the industry and to account for the lack of benefits. “For two years, we’ve fought for fair pay rules for New York City drivers. We are pleased that New York is listening to drivers who have long suffered with earnings that fall below minimum wage, but it’s critical that the city get this right. While the city’s proposal has many strong points, the current version underestimates drivers’ costs. The average driver pays nearly triple the cost the city estimated for leases – and  a much larger portion of drivers lease than the city’s formula assumes. What’s more, the city formula fails to account for the costs shifted to drivers to pay for their own benefits like health care – the pay rate needs to reflect that,” said Ryan Price, Executive Director of the Independent Drivers Guild. “Working families like mine are desperate for a raise and quick passage of these rules, but the city can’t call this a livable wage if the numbers do not reflect reality. We are urging the city to correct their cost estimates and then pass these rules without further delay,” said IDG member Tina Raveneau who drives for apps like Uber and Lyft. “As a working, single mom, I really appreciate that the city is taking action for fair pay, but they need to know their numbers are flat out wrong and they are missing some of the big expenses other employees take for granted. I pay $429 per week to lease my little Nissan Sentra compact sedan – that is triple the cost estimate in the city’s proposal. The city’s math assumes the average driver is paying less than $150 per week, which simply is not the case. Look at the ads at all the major companies, leases START at $350 or $375 – and that’s for little old cars.”More than 16,000 drivers signed the IDG’s petition to require a minimum pay rate for apps like Uber and Lyft. To force action, the IDG filed a formal rulemaking petition in March and the city responded in May that it planned to act on pay rules this summer. In August, the city council passed and Mayor de Blasio signed legislation requiring the Taxi and Limousine Commission to set minimum payments for drivers for high volume app-based for-hire vehicle services like Uber and Lyft. See more on the city’s rulemaking process here. The IDG used the same regulatory and legislative tactics to require Uber to add a tipping option to the app last year. Just months after the city greenlighted the IDG’s proposed tipping rules, Uber added a tipping option not only for New York City (its biggest market) but for drivers across the U.S. 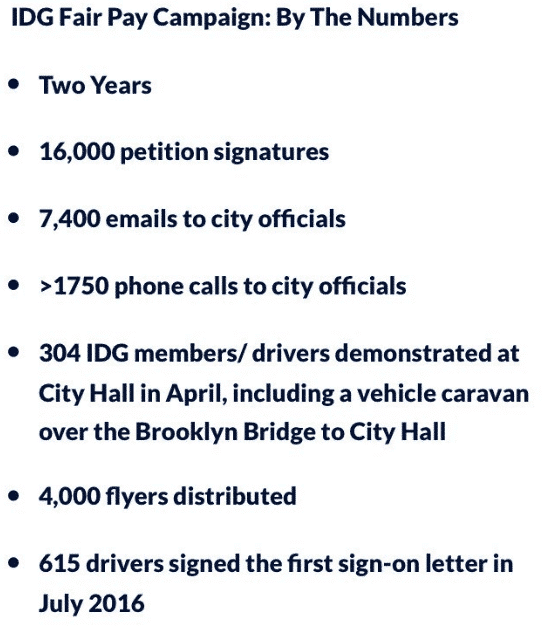 The Independent Drivers Guild is an affiliate of the International Association of Machinists and Aerospace Workers and represents and advocates for more than 65,000 app-based drivers in New York City. We are Uber, Lyft, Juno, and Via drivers united for a fair for-hire vehicle industry.