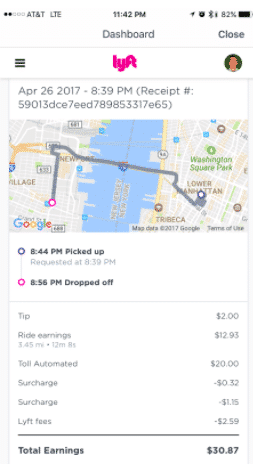 New York, NY — New York State Assembly Member Robert Rodriguez and the Independent Drivers Guild (IDG) are calling for the state to launch a full investigation into ride-hail app Lyft’s billing and payment practices on interstate trips. In a letter to New York State Attorney General Eric Schneiderman and Executive Deputy Commissioner Nonie Manion of New York’s Department of Taxation and Finance, Assembly Member Robert Rodriguez requested the investigation, writing that, “Lyft appears to have engaged in a large-scale deception of the very drivers and customers it claims to benefit.”

New York State’s sales tax is only supposed to be charged to passengers for rides that begin and end in New York State. However, IDG members who drive for Lyft found that the company is improperly deducting this charge as well as the Black Car Fund surcharge (BCF) from their pay on interstate trips originating in New York City. When IDG members notified Lyft of the two wrongful charges, totaling 11.4% of the fare, company representatives claimed these were not taxes but two other administrative costs that happen to mimic the rates of the NYS sales tax (8.875% in New York City) and the BCF (2.5% for the injured workers’ compensation and safety fund). At least 16,000 IDG members drive for Lyft in a given week and the service completes about 60,000 New York City trips each day per the latest TLC data from March 2017.

“On behalf of the hundreds of thousands of New Yorkers affected by Lyft’s tax scam, I am calling for a full investigation into the company’s practices with regard to its billing of interstate trips,” said NYS Assembly Member Robert Rodriguez, who represents Assembly District 68, comprising East Harlem and Randalls and Wards Islands. “New York must act swiftly to stop this deceit and return these ill-gotten gains to drivers and consumers. When businesses add fake taxes to wages and services, they are not just cheating workers and consumers out of hard earned dollars, they are undermining the public trust. Lyft must be held accountable”

“This is an egregious and deliberate tax scam that amounts to wage theft affecting thousands of our members. By disguising these pay deductions as state taxes, Lyft willfully deceived drivers in order to rob them of their earnings and further enrich the company,” said Ryan Price, Executive Director of the IDG, a Machinists Union affiliate which represents and advocates for 50,000 ride hail drivers in New York City. “We urge riders and workers to sign our petition calling for new rules to protect New Yorkers from this exploitation once and for all, and call on Lyft to come to the table to negotiate with our members for basic rights and a dialogue with management.”

“We are calling on New York State to investigate the taxation and interstate billing practices of Lyft, Uber, Juno and other ride hail apps as well,” added Price. “From shady tax schemes to upfront pricing, Uber, Lyft and Juno all seem to be deploying underhanded accounting tactics that are robbing hard working drivers and riders of millions in hard earned wages. Assembly Member Rodriguez has been fighting for consumer protections to combat deceptive business practices for years and we are thankful to him for standing with New York’s drivers and consumers.”

In April, the Independent Drivers Guild called on New York City regulators to enact pay protections across the ride hail industry, including to protect driver pay from taxes and surcharges and to grant drivers the right to appeal when a company underpays or steals money from a worker for a completed service. The Guild’s petition for these rules has garnered more than 800 signers. IDG members sent the TLC over 1500 emails calling for these pay protections and 60 members attended an April TLC hearing to demand these protections.

Nine in ten New York City ride-hail drivers are immigrants and most IDG members report driving full time. The majority of our members report household incomes of less than $50,000 per year before expenses (gas, lease, insurance and licensing fees etc.) all while working to support their families in one of the most expensive areas of the country.

The Guild is an IAMAW affiliate representing app-based drivers. We are Uber, Lyft, Via, Juno, Gett workers united for a fair for-hire vehicle industry.

For any media inquiries, please contact Moira Muntz at press@driversguild.org